Charles L. Weldon Papers
JavaScript is disabled for your browser. Some features of this site may not work without it. 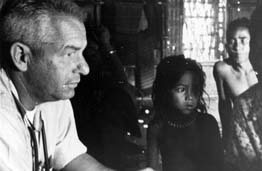 Dr. Charles L. Weldon attended medical school at Louisiana State University in New Orleans, graduating in 1951. While attending medical school, he met Patricia McCreedy, also a medical student at LSU. Shortly after they graduated, they got married and settled in a small town in rural Louisiana where they established a family practice.

After a while, the Weldons felt their work was not challenging them professionally. They were inspired to seek employment in government service after reading a book by Margaret Mead titled Coming of Age in Samoa. They applied to American Samoa for medical positions and were hired. They moved to Samoa in 1961, and after two years, decided to move on.

The Weldons applied to the Agency for International Development (USAID) in the State Department. Both were hired with Charles given the position of Chief of Public Health, USAID-Laos in 1963. They remained there until Dr. Weldon retired from USAID in 1977.

Transportation in Laos was primitive. Once outside of a major city, the primary mode of transportation was by boat, walking, or by air. With large distances to cover, Weldon frequently flew to areas in Laos where he was needed, and the airline he used was Air America. He got to know the pilots who flew him to his various destinations. More than once Dr. Weldon was evacuated by Air America pilots just before Communist forces overran the area.