Vice Admiral Charles E. Rosendahl Papers
JavaScript is disabled for your browser. Some features of this site may not work without it. 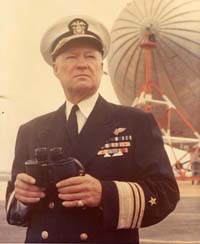 Charles Emery Rosendahl was born on May 15, 1892 in Chicago, Illinois to Swedish immigrants, Charles Oscar and Johanna Rosendahl, née Johnson. After Rosendahl’s paternal grandfather, a superintendent at an iron ore mine, had been killed in an explosion, his son Charles Oscar, a railroad worker, and his two brothers and sisters emmigrated to the United States. His maternal ancestors were also from Europe. Charles Emery grew up in a Swedish speaking household.

After having attended public schools in Topeka, Kansas and Cleburne, Texas, he won an appointment to the U.S. Naval Academy in 1910. On June 6, 1914, he graduated and was commissioned Ensign. On May 2, 1943 he was promoted to Rear Admiral. His last advancement came during his retirement. On November 1, 1947 he was promoted to the rank of Vice Admiral, based on his record of combat awards.

Throughout the First World War he served on a number of cruisers both in the Pacific and the Atlantic Oceans. In the Atlantic theater he escorted troop convoy ships. Six month before the Armistice, Rosendahl reported to duty at a Fuel Oil Testing Plant in Philadelphia, Pennsylvania. He then became an Engineering Officer on various destroyers until he was detached from the Navy on July 30, 1919.

Charles Rosendahl became an instructor in the Department of Electrical Engineering and Physics at the Naval Academy for about eighteen months. He received his designation as Naval Aviator for Airships in November of 1924 and was a navigator on the USS Shenandoah at the Naval Air Station, Lakehurst, New Jersey.

He held the rank of a Lieutenant Commander on navigation watch when the Shenandoah rigid airship crashed because of a storm near Ava, Ohio in September 1925. Of the forty-three crew members, fourteen were killed. With six of the surviving crewmen, Rosendahl, as highest ranking senior officer, was able to land the forward section of the dirigible safely. Due to his actions and heroism in this incident, he received by Act of Congress, the Distinguished Flying Cross in 1947. Rosendahl was Executive Officer and later became Commanding Officer on the USS Los Angeles in 1926. In the second half of that year, Rosendahl assumed additional duties in the preparation of the World Flight of the Graf Zeppelin from Lakehurst as a U.S. Naval Observer. He was also a guest of Captain Hugo Eckener.

From 1930 to 1932, Charles Rosendahl assumed responsibilities in the Plans Division of the Bureau of Aeronautics, Navy Department, Washington, D.C. He also fitted out the USS Akron with a crew, conducted test flights and essentially assumed command of that airship. On June 11, 1934 Rosendahl assumed command of the Naval Air Station in Lakehurst, New Jersey. He also continued being a U.S. Naval Observer on board the Hindenburg flying in the Atlantic Ocean. The Naval Air Station was under his command, when the Hindenburg fatally crashed over Lakehurst on May 6, 1937.

At the end of 1934, Charles E. Rosendahl married Ms. Jean Wilson, a business woman born in Houston, Texas. The wedding took place in Los Angeles, California in a private and quiet ceremony after a courtship of two years. At the time of their marriage, Rosendahl was forty-two and his bride ten years younger. The couple did not have any children.

At the outbreak of the Second World War, Rosendahl both served on several battle ships and fulfilled his duties in the Office of the Secretary of the Navy and Office of the Chief of Naval Operations. There he was mainly responsible for lighter-than-air developments. In 1942 Rosendahl took command of the cruiser USS Minneapolis which was severely damaged by the Japanese during a battle at Tassafaronga, at the end of November 1942. As a consequence of his gallantry, bravery, and outstanding leadership, the USS Minneapolis was able to return to port. For these actions, he was awarded the Navy Cross. In early 1943 he ended his tenure on the USS Minneapolis and assumed the rank of a Rear Admiral in May 1943. He also continued in his position of Chief of Naval Airship Training at the Naval Air Station in Lakehurst. There he commanded experimental and flight testing and oversaw the Training Center at Moffett Field in California among other duties. Rosendahl’s command of Lakehurst and Moffett Field ended in the summer of 1946 with a promotion to Admiral and the title of Chief of Naval Airship Training and Experimentation.

After his retirement from the United States Navy, Admiral Rosendahl was the executive director of the National Air Transport Coordinating Committee (NATCC) implementing the reduction of aircraft noise levels.

Vice Admiral Rosendahl received many awards and medals among which the Navy Cross, the Distinguished Service Medal and the Distinguished Flying Cross are the most prominent. He also held honorary degrees of Doctor of Science in Aeronautics from Florida's Tampa University, and Doctor of Laws from Rider College in Trenton, New Jersey.

Charles Rosendahl was an active member in many societies, fraternities, and clubs such as the Institute of Aeronautical Sciences, the John Ericson Society, and the Circumnavigator’s Club of New York City.

In his retirement, he was an aeronautical consultant and wrote many books and articles about airships as well his memoirs.

Vice Admiral Charles Emery Rosendahl USN (Retired) was eighty-four when he died of natural causes at the Philadelphia Naval Hospital on May 14, 1977.