Ormer Locklear Collection
JavaScript is disabled for your browser. Some features of this site may not work without it. 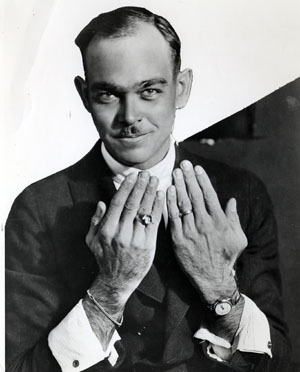 Ormer Leslie Locklear was born near Fort Worth, Texas in 1891. He enlisted in the United States Army Air Service and received his pilot training at Barron Air Field in Fort Worth, Texas. A born risk taker and showman, Locklear saw some post World War I barnstorming shows, and though that his flying was a whole lot more thrilling. In 1919, he left the army and along with two of his friends started touring the country performing aerial stunts.

In the fall of 1919, Universal Film Manufacturing Company contracted Locklear to star in their film The Great Air Robbery. Locklear moved to Hollywood and acted in the film, while doing his own flying. He also met and romanced the young starlet Viola Dana. In 1920, Locklear was completing filming on his second motion picture, 20th Century Fox’s The Skywayman, when a night time flying sequence was mistimed, and Locklear and co-pilot Milton Elliot died when their aircraft impacted with the ground. Locklear’s body was returned to Texas and he received a funeral procession through the streets of Fort Worth to the Greenville Cemetery, where he was buried. In 1991, the Texas Historical Commission erected a historical marker at his grave, commemorating his life.