Al Mooney Papers
JavaScript is disabled for your browser. Some features of this site may not work without it. 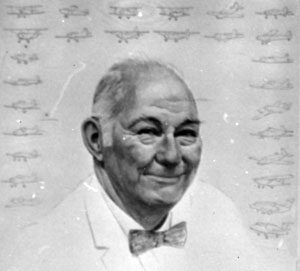 Al Mooney (born July 10, 1904) and his brother Art were the sons of a railroad engineer. From their father they learned drafting skills that were later incorporated into their aircraft designs. Both brothers developed an early interest in aviation and pursued interwoven careers in the field throughout their lives; careers characterized by engineering brilliance and financial misfortune. Mooney personifies and in many ways pioneered the evolution of civil aircraft (and some military applications) from paper and pencil and trial and error design to computerized designs with tested components. Pilot safety and optimal performance were always uppermost in Mooney’s designs and plans.

Al Mooney entered the aviation field almost by accident. In 1924 Mooney was visiting his father in a retirement home when an aircraft belonging to J. Don Alexander flew over the home. Later, Mooney pointed out to Alexander a problem with the rigging on his airplane. This chance encounter led to a job offer at Alexander Aircraft. It was at Alexander Aircraft that Mooney constructed his M-1, the Eaglerock Long Wing, the first of his 23 successful aircraft designs.

In 1926 Al took his first flying lesson, but had no later recollection of the specific date or aircraft. That same year he spent a brief period of employment with Montague – where his M-2 design was constructed – before returning to Alexander Aircraft where the Alexander Eaglerock Bullet, Mooney’s M-4 design, was built.

Realizing a lifelong dream, Al joined his brother Art in 1929 to form the Mooney Aircraft Corporation in Wichita, Kansas. Unfortunately the venture was short-lived; the company closed in 1934 during the Great Depression.

That same year Mooney was hired as chief engineer by Giuseppe Bellanca. It was at Bellanca that he became associated with the Bellanca Airbus and the “Irish Swoop” of McRobertson Race fame. He was at Bellanca only a year before becoming vice-president/chief engineer of Monocoupe Aircraft Corp. in St. Louis, Missouri. There he designed the Monosport G (Mooney M-10) and Monocoach.

Following WWII, Culver’s sales evaporated, as did those of most civil aircraft manufacturers. However, in 1946, Al and Art once again pursued their dream and returned to Wichita to reopen the Mooney Aircraft Corporation where they remained until certification of the M-20 in 1955. It was their first aircraft, the Mooney Series 18 produced in 1946, which was dubbed the “Mooney Mite” and exhibited the reverse tail by which Mooney aircraft are so well-recognized. A military version of the “Mite,” the M-19 “Cub Killer,” was developed for use in the Korean War.

Due to economic pressures Mooney Aircraft Corporation moved from Wichita to Kerrville, Texas in 1953 where the M-18 continued to be produced while the M-20 made its first flight that same year. The M-20 was certified in 1955, following which Al Mooney left the company which bore his name and became an employee of Lockheed-Georgia where he was able to secure a position for his brother Art, as well.

While at Lockheed, three of Al’s designs were developed. One became the Lockheed Jetstar and a second, a utility plane the LASA 60, was built for use in Mexico and South America. During development of his third design Al’s wife Opie became ill and died in 1966. The following year Art retired and it was only a year later in 1968 that Al himself retired. Art died in 1980. About a year after completing his autobiography with Gordon Baxter, Al Mooney died on May 7, 1986 in Dallas, Texas, survived by his son, John and daughter Bobbie Sanders.

Permission to publish material from this collection in any form, current or future, must be obtained from the Special Collections and Archives Division, Eugene McDermott Library, The University of Texas at Dallas