Berlin Airlift Veterans Association Collection
JavaScript is disabled for your browser. Some features of this site may not work without it. 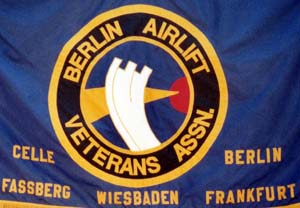 The collapse of the Axis Forces after the Second World War left the United States and the Soviet Union the remaining super powers in the world and marked the beginning of the Cold War. The first conflict that put the two countries to a test was the Berlin Blockade from June 24, 1948 through May 12, 1949.

At the end of the war Germany was divided into four sectors, each governed by one of the Allies: the United States, the Soviet Union, Great Britain, and France. Because of its special status, Berlin was divided as well. The Soviet Union intended to keep the German economy weak by keeping the “old” Reichsmark as the currency for Germany as a whole while allowing the use of Soviet currency in their own sector. The Allies, however, called their bluff on June 21, 1948, and established a new Deutsche Mark (DM) as the currency in their territories without Soviet consent. In response the Soviets, considering this an act of provocation, closed all the land routes to and from Berlin.

Overnight, more than two million inhabitants of Berlin were without any energy and all traffic to and from the city had stopped. The Allies, under the leadership of the United States and the command of General Lucius D. Clay, then Military Governor of Germany, responded by using the three air corridors – each twenty miles wide - that had been set up by the Four Powers at the end of the war and lead through the Soviet Sector to the city of Berlin. On June 29 1948, the United States Air Force Europe (USAFE) formed the Berlin Airlift Task Force and on July 7, the first Douglas C-54 Skymaster flew a load of coal stored in duffel bags for industrial use to the besieged city. Operation Vittles was officially under way.

Under the command of General William H. Tunner the initial endeavors of the airlift were reorganized by staggering the airspace in the corridors. Thus the airplanes flew three minutes apart at an altitude of 4,000 to 6,000 feet with the result that more than 1,000,000 tons of goods were flown to support the city.

Pilot Gail Halvorsen became famous for adding a "bombing run" to the flight to Berlin. He had spent some of his spare time in the city giving candy to a group of children who stood at the end of the Tempelhof Airport's runway to watch the unloading of the airplanes. Halvorsen promised the children that he would return the next day to drop off some more candy. As a sign to the children, Halvorsen would “wiggle” the wings of his airplane. The following day, Halvorson dropped the candy attached to a handkerchief and Operation Little Vittles was begun. The children named Halvorsen either Mr. Wiggle, Rosinenbomber (Raisin bomber), or Schokoladenbomber (chocolate bomber).

The Berlin Airlift Veterans Association (BAVA) was established in January of 1991. The main purposes of the BAVA are to commemorate the services rendered by the participants of the Berlin Airlift both military and civilian, to perpetuate the history and significance of the Berlin Airlift, to honor those who gave their lives, and to establish programs that will enhance Education, Friendship, and Understanding between people, among other things.

Even today, the Stiftung Luftbrückendank (Airlift Gratitude Foundation) organizes exhibitions and events as well as grants scholarships to honor those who participated in the Berlin Airlift. The citizens of Berlin will never forget.