Chuck Hodge Collection on Walter H. Scheurs, Jr.
JavaScript is disabled for your browser. Some features of this site may not work without it. 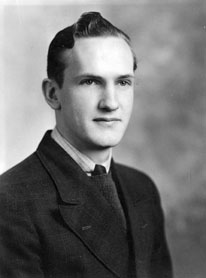 Walter Henry "Dutch" Scheurs, Jr. was born April 20, 1922 in Cedar Rapids, IA to Walter Henry Scheurs and Lucille Vernus Scheurs (née Kasner). He was the second of six children and the oldest son.

From December 26, 1942 to April 1944, Walter Scheurs, Jr. traveled the U.S. going from one aviation or technical school to another. From April to October 24, 1944, Walter Scheurs, Jr. was deployed to Foggia, Italy with the 825th Bomb Squadron, 484th Bomb Group, 49th Bomb Wing of the 15th Air Force. He served as a top turret gunner and mechanic on a Consolidated B-24 Liberator nicknamed, Archangel for a total of thirty-seven actual missions. On Jul 11, 1944, during his twenty-first mission, a bomb run against the German Submarine Pens at Toulon, France, Walter Scheurs, Jr. was wounded. For this, on July 23 and 28, 1944 he was respectively awarded the Purple Heart and the Air Medal with Oak Leave Cluster. The Distinguished Flying Cross was awarded on November 12, 1944. By the time Walter Scheurs, Jr. returned to the U.S. on December 1, 1944 he also had received seven bronze stars for campaigns against Rome-Arno, southern France, the Balkans, the Rhineland, northern France, the northern Apennines of Italy and the air war in Europe. Walter Scheurs, Jr. was honorably discharged from the USAAF on September 24, 1945 as a Technical Sergeant at the Jefferson Barracks, MO. His last duty station was at Chanute Field in Rantoul, IL.

After the war, Walter Scheurs, Jr. eventually found employment with the Iowa Manufacturing Company from March to June 1946 before buying the Sinclair Oil Company Service Station on 3rd Avenue SE in Cedar Rapids, IA. He operated this station from June 1946 to October 1947 and then decided to enlist in the U.S. Air Force (USAF). From at least February 6 to December 26, 1947, Walter Scheurs, Jr. was enlisted in the U.S. Naval Reserves on inactive duty in Naval Reserve Division 9-53.

Walter Scheurs, Jr. served at Davis-Monthan AFB until April 19, 1956 when he was sent to Germany and assigned to Kaufbeuren Air Base and Fürstenfeldbruck Air Base with the 7330th Flight Training Wing. On February 13, 1958 he was transferred to Bentwater, Suffolk, UK and was stationed there with the 81st FTR Bomb Wing Support Squadron until April 30, 1959.