Karl Baur Collection
JavaScript is disabled for your browser. Some features of this site may not work without it. 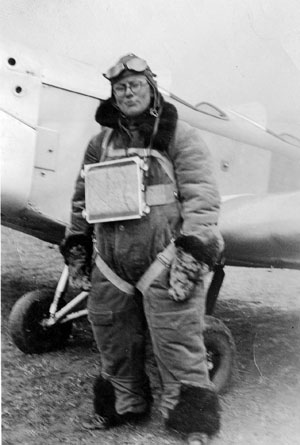 Karl Baur was born November 13, 1911 in Württemberg, Germany. In 1927, he attended a summer camp for young boys interested in aviation, and it was here that Baur developed his desire to fly. He became involved in the world of glider flying during the 1930s. With the F1 Fledermaus glider he completed the necessary distance, height, and acrobatic flying requirements to earn an International Silver C Badge in 1934. (Only nineteen of these were awarded that year. Baur was one of fifteen Germans who received the badge.) Baur also worked with powered aircraft and earned a private pilot license in 1931.

In 1935, Baur accepted an opportunity to go to Japan and served as instructor at a Japanese glider school. He also did some acrobatic flying at various points around Japan. Upon his return to Germany in 1936, Baur completed his degree in engineering from Technische Hochschule Stuttgart. He was employed by the German Aviation Research Institute testing aircraft designs and instructing German pilots.

Baur was called to military duty and attempted to join the Luftwaffe in 1938, but because of problems with his eyesight he could not pass the physical to be certified as a military pilot. He stayed with the German Aviation Research Institute until 1939, when he received an offer to become the chief test pilot for the Messerschmitt Company. At Messerschmitt, he test piloted such famous aircraft as the Me-109, the Me-262 jet fighter, and the Me-163 rocket plane. On April 29, 1945, the allies captured the German city of Augsburg, where Baur was working on Messerschmitt aircraft.

Baur and his crew were required by the American Forces to repair the Me-262’s that had been damaged and instruct some American pilots in their operation. Along with other German experts in the field of aeronautics and rocketry, Baur was sent to the United States in fall of 1945. He spent several months in the United States demonstrating the Me-262, providing technical help to American test pilots, and explaining the aeronautic work he had done in Germany. In December 1945, Baur was able to return to Germany and reunite with his family.

Baur worked several odd jobs after the war including serving an interpreter to the commander of an American Army Air Force Base in Germany, and as a sales representative for a company that manufactured car batteries. Baur accepted a job as an engineer at the Chance Vought Aircraft Corporation in Dallas, Texas in August 1954. Baur worked for Chance Vought until his death on October 12, 1963. His widow, Isolde Baur lived in the Dallas-Fort Worth area until her death on June 5, 2006.