George I. Hockensmith Papers
JavaScript is disabled for your browser. Some features of this site may not work without it. 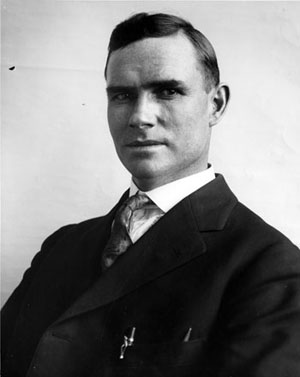 George Ignatius Hockensmith was born on October 6, 1887 in Wooster, Ohio to George Hockensmith and Mary Burns. He had two sisters, Mrs. Harry Pickering and Mrs. Ray Williamson. He was raised by Texas Rangers after he lost his parents and home during a raid by Mexican bandits. He was married to Anna F. Withrow from Newett, Colorado. The couple had seven children.

In 1914, the Hunkin-Conkey Company hired Hockensmith as superintendent to oversee the construction of the Detroit-Superior High Level Bridge in Cleveland, Ohio.

During World War I, Hunkin-Conkey won the bid to build the Goodyear blimp factory at Wingfoot Lake southeast of Akron, Ohio. Hockensmith was contracted to be the superintendent overseeing the construction of the rubber plant facilities. Over a 1,000 balloons of various types and makes were assembled for the army and navy there. At the Wingfoot Lake Air Naval station, the plant's first dirigible had a balked landing during its test flight but Hockensmith, without prior training or experience, volunteered to fly the airship. He eventually received his Dirigible Balloon Pilot License in 1918.

After the construction of the Wingfoot Lake facilities were completed that year, Hockensmith stayed with the Goodyear Tire & Rubber Company. Goodyear then began to establish facilities to support their dirigible program at strategic points in the country.

Hockensmith worked as field manager at the Goodyear flying field at Los Angeles, CA and was elected director of the Aero club of Southern California. In Los Angeles, a small version of a dirigible named the was developed by Goodyear for commercial use. Hockensmith went on promotional tours with the new blimp.

In 1929, Hockensmith started his own construction company. He was again approached by Hunkin-Conkey to oversee the building of the Arlington Memorial Bridge in Washington, D.C. Upon completion of this monument, Hockensmith worked for Booth and Flinn in Pittsburgh as General Superintendent supervising the construction of the George Westinghouse Bridge and the Ohio River Boulevard.

During the 1930s, he built the British Guiana Air Base at Georgetown, British Guiana, and air bases in Brazil for which he received the (Medal of the Order of the Southern Cross).

Until his death at age 64 on October 31, 1951, Hockensmith continued to build several bridges, among which is the Trinity River Bridge in Dallas, Texas.