Ed Rice Papers
JavaScript is disabled for your browser. Some features of this site may not work without it. 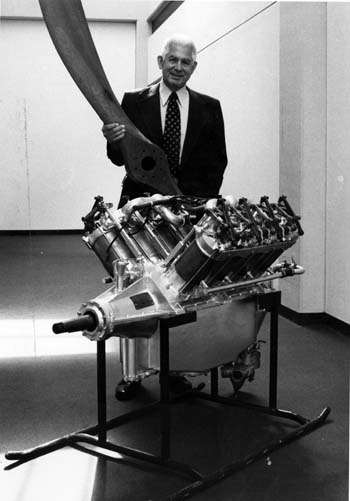 George Edward "Ed" Rice was born on January 28, 1912 in the Village of Collett, Pike Township, Jay County, Indiana. In 1928, he graduated from Portland High School, Portland, Indiana at the age of 16 with honors. 1930, Rice graduated from Northwestern University, Evanston, Illinois in American History and Business Administration.

Ed Rice first got in contact with pilots working for Smith Brothers Flying Circus in 1919 where he, in order to get a flight, ran errands; sold tickets; distributed flyers; and participated in the flying acts as parachutist and wing walker. Ed Rice first soloed in an OX-5 Swallow on June 23, 1928 at the age of 16 and held an active pilot license until the age of 70.

From 1936 to 1940, Ed Rice worked for the Lockheed Aircraft Corporation, Burbank, California, where he supervised the Precision Sheet Metal Assembly, the Final Assembly, and the Tool Engineering for various aircraft models, such as Lockheed Model 10, Model 12, Model 14, Models 212, and B-14 Hudson bombers. During his tenure, he also participated in rebuilding Amelia Earhart's Lockheed Model 10 Electra before her final flight.

In April 1955, Rice found a position as Sales and Program Manager for military and civil application of solid propellant rocket propulsion and Jet-Assisted Take-off (JATO) booster systems with the Aerojet-General Corporation, Azusa and Sacramento, California. His responsibilities covered the development of Special Civil Air Regulations for rocket engines on civil aircraft, supervision of design, development, and certification of rocket engine models. He also participated in flight tests and training flights. He left the company in summer of 1969.

After leaving Aerojet General, Rice went to work for worked for the DeVore Aviation Corporation in Roslyn Heights, New York as Vice President, Marketing. Gilbert DeVore, founder of the consulting firm DeVore Aviation, decided to transform his company in order to manufacture aviation related products. Thus, by hiring Rice, DeVore was able to produce the JATO rockets, since the former took all the rights with him after having left Aerojet-General Corporation. DeVore expanded his business by buying PK Floats, but the company is better known for its vertical tail floodlights, Tel-Tail. Ed Rice retired from the company as an Officer and Director in May, 1978.

In summer of 1978 Rice’s personal aviation library was received by the History of Aviation Collection (HAC) at The University of Texas at Dallas (UTD), while at the same time, he was the curator for the Special Collections and Archives Division on a volunteer basis. Under his leadership, the aviation holdings doubled in size by acquiring rare and important collections, such as the Stella Randolph Collection, the Braniff Collection, the Tony Page Papers, and the William Fuller Collection, to name a few. Rice was a member of the Advisory Council to the HAC. During his retirement, Rice took a crucial role in founding the Frontiers of Flight Museum (FOF) at Love Field, Dallas, Texas.

On April 3, G. Edward Rice died of a heart attack at the age of 82 at home. His second wife Kathryn Mary Rice preceded him in death a year earlier.