Davis Airlines Collection
JavaScript is disabled for your browser. Some features of this site may not work without it. 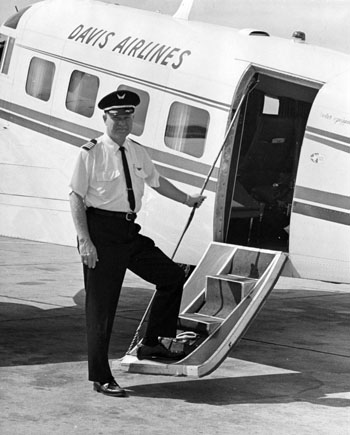 Guy A. Davis was born August 26, 1920, in White City, Texas. He was a consummate airman who made a significant contribution to the commuter airline industry in the state as the co-founder of Davis Airlines with his wife, the former May Bell Nunn.

Davis started flying in 1935 and soloed in a Taylor E-2 Cub at age 15. After his high school graduation in 1939 he enrolled in college at Texas A&M, class of 1943, and joined the university’s Civilian Pilot Training Program in 1940. In 1941 Davis became an instructor in the program, teaching aerobatics in the Myers OTW, WACO UPF-7, and Boeing Stearman.

During WWII Davis served as a civilian pilot in the USAAC Ferry Command with the 5th Ferry Group stationed at Dallas Love Field and was commissioned as a 2nd Lieutenant in 1943 flying P-39s, P-40s, and P-51s in the United States, Alaska, and the Caribbean. Two tours in the Pacific Theater followed with the Transport Command (later Air Transport Command) for which he flew C-54s, C-47s, and B-25s. During his 14 months in the Pacific he was awarded with six battle stars.

At the end of his 65-year flying career, Davis had logged approximately 18,000 hours in over 100 types of aircraft.